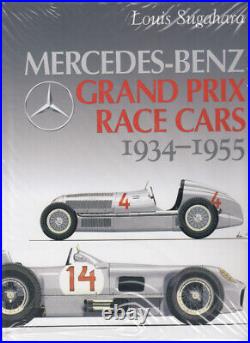 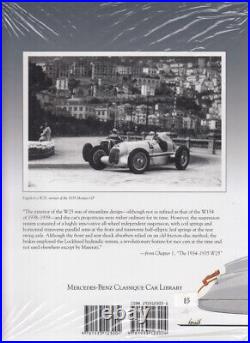 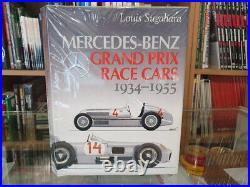 2nd hand book in excellent / like new condition. 9781933123004 Louis Sugahara, whose fascination with Mercedes-Benz race cars began in childhood, combines his artistic talent and automotive expertise to take readers back to the golden age of Grand Prix racing when the Silver Arrows dominated the circuits. From the W25 to the W196, Sugahara traces the evolution of the Mercedes-Benz Grand Prix race cars that competed between 1934 and 1955, including the renowned 300 SLR racing sports car. Using historical records, the author documents the ongoing modifications that were made to the cars due to formula rules, circuit conditions, and the racing styles of such legendary drivers as Caracciola, Lang, von Brauchitsch, Fagioli, Fangio, Herrmann, Moss, and Kling. The book captures the excitement of Mercedes' greatest victories as well as the dedication of racing manager Alfred Neubauer and the genius of the engineering team behind the Three-Pointed Star.

The lively narrative is illustrated with rare historical photographs and more than one hundred original drawings by the author. These meticulous renderings of the vehicles, accompanied by detailed commentary, show how body styling and even minor exterior features, such as the radiator grille, windscreen, and rear-view mirror, were influenced by the constant process of modification and experimentation. Supplemented by an appendix containing circuit layouts, race results, and model specifications, this unique "picture book for grown-ups" conveys the enormous technical and emotional appeal of the invincible Mercedes. Louis SugaharaBorn in Japan in 1924, Louis Sugahara grew up with a passion for anything that moved--in the air, on water, and, of course, on land. His artistic talents and a strong interest in technology inevitably led to a career in automotive styling and design.

After studying at the Technical and Engineering College of Waseda University, he took a position in 1950 with Kanto Automobile Corporation, a producer of auto bodies for Toyota. Sugahara initially worked in the design department where he was active in designing Toyota car bodies. He then took on assignments in the development department and later became a consultant for the motor sport department. In 1969, after the development of the first Toyota Mark II Wagon, he switched from the automotive field to shipbuilding. In 1983 he was appointed Executive Managing Director and was responsible for planning and development, a position he held until his retirement in 1987. From 1989 until 1994, he was the manager of a team for high-performance VTOL (Vertical Takeoff and Landing) aircraft and then continued to worked part time as a planning and development consultant for the team.

His special relationship with the elements air and water has also been manifest in his active participation in developing sailing yachts for competitions. In addition to Mercedes-Benz Grand Prix Cars 1934 -1955 (Nigensha, 1997), Mr.

Sugahara has published other automotive books. He was one of the first in Japan to recognize the growing market for station wagons and in 1970 published The World of the Station Wagon. And in his foresighted book X Car of the 80's, published in 1978, he gave readers a glimpse of future developments in automotive engineering. Louis Sugahara, whose fascination with Mercedes-Benz race cars began in childhood, combines his artistic talent and automotive expertise to take readers back to the golden age of Grand Prix racing when the Silver Arrows dominated the circuits. Louis Sugahara Born in Japan in 1924, Louis Sugahara grew up with a passion for anything that moved--in the air, on water, and, of course, on land. Sorry, our items are NOT available for pick-up. No additional information at this time.

How to Paint Muscle Cars and Show Cars Like a Pro. Alfa Romeo T33/TT/3 - The remarkable story of 115.72.002 -Exceptional Cars Serie. This item is in the category "Books, Comics & Magazines\Books". The seller is "automoto_bookshop" and is located in this country: AU. This item can be shipped to Australia, North, South, or Latin America, all countries in Europe, all countries in continental Asia, New Zealand.