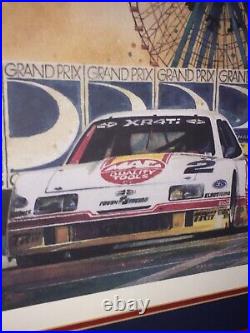 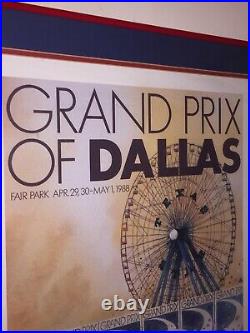 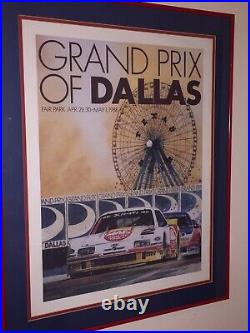 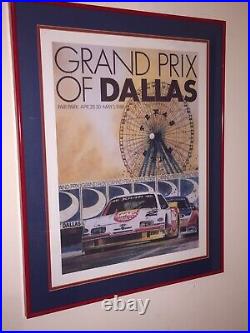 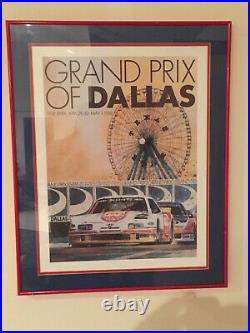 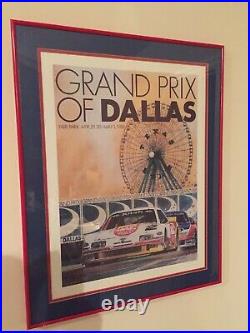 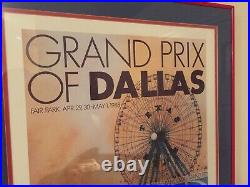 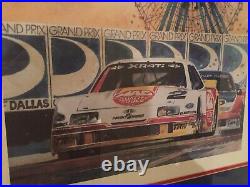 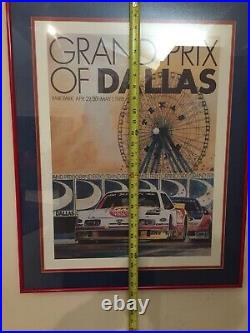 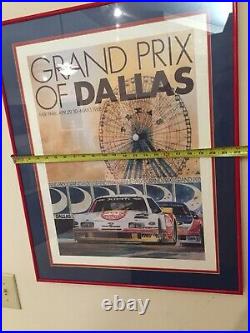 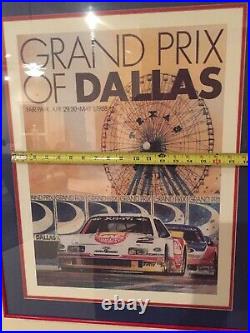 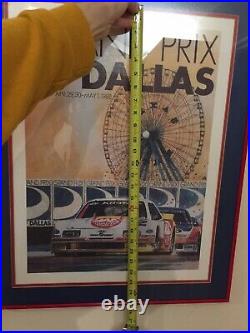 Vintage, authentic, not a reproduction or reprint. Real Lithograph, not an inkjet copy. Paul Newman and Olympian Bruce Jenner now Caitlyn Jenner both drove in this race! You won't find anything like this anywhere. If you can find another one like this please show me.

No water stains, yellowing or acid burn. I took it out of the frame and the matting surround is adhered to the backing board. I'm not sure if the poster itself is adhered to the foam board backing. I'm not crazy about the frame style, but it is dated looking true to 1980's style.

The poster itself looks like it's approximately 18x24"inches behind the matting and the metal frame is approximately 22x28" inches. This 1st article about the race is published in D Magazine in April of 1988.

The 2nd Article below it is from the UPI United Press International inc. BY RHAE LUMPKIN PUBLISHED IN D MAGAZINE APRIL 1988.

There should be something for everyone in Fair Park during the Grand Prix of Dallas, from April 29 through May 1, 1988. The rides on the midway will spin, tumble and lurch along while a concours d'ele-gance and an antique automobile show compete for attention in the Automobile Building. And millions of dollars worth of brilliantly painted racing cars fight wars around the new 1.2 mile race track. But the outcome of the event is already settled, Dallas and the neighborhood surrounding Fair Park will be the big winners. Jarrett Buddy Boren has organized the Grand Prix as a non-profit event and will donate all income over expenses to Dallas charities. Boren is also working with the Dallas Black Chamber of Commerce and Diane Ragsdale to make sure that members of the nearby community profit as vendors or workers during the construction and running of the three day event. The new race track uses only a portion of the course laid out for the 1984 Formula 1 race. Constructed on the southeast side of the fairgrounds, the 1988 track allows access to almost all of Fair Park during the race. Racing will begin on Friday, April 29, with practice and qualifying for all classes. Qualifying day is a good time to watch for celebrities and learn to recognize the different cars. For those who want a little advance knowledge of Saturday and Sunday's outcome, Friday's the time to clock the cars with a stop watch. Saturday will consist of practice and qualifying until shortly after noon, when the SCCA Corvette Challenge Race will be held. This will be 50 laps with a one-hour time limit.

Local sprint car driver Ricky Summers, 33, is scheduled to drive Corvette #99 for Young Chevrolet. Summers raced motorcycles between the ages of 14 and 21, but after he broke both legs twice and one of his shoulders twice, he moved into a safer line of work. For the last 12 years Summers has raced sprint cars on dirt tracks.

He estimates he has raced over 10,000 laps and won over 50 races. This means he has pitched a sprint car sideways into a left turn at over 100 miles an hour 20,000 times. But driving a Corvette on a road racing course will be a new experience for Summers, who admits he has never turned right (sprint car races are run counterclockwise on a dirt oval) nor shifted gears on a race track. "In fact, " mused Summers, I've never even owned a car with a manual transmission. Saturday's last race may be the closest thing to a real old-time sports car race of the weekend.

Halfway between a race and an exhibition, most of the entries in the Vintage Car Race are too rare and too expensive to be driven at true racing speeds. Dan Sherrod, an SCCA official commented, I find it hard to believe that men would risk cars that valuable on a race track. Sunday afternoon brings the fast cars to Fair Park, starting with the Formula Super Vees. This is the last step in amateur racing, though many of the drivers are no longer true amateurs. In auto racing there is no clear-cut distinction between amateurs and professional drivers. Practically all Super Vee racers are hoping to become full-time professional drivers. Super Vee stars regularly move up to Indy cars, or professional GT or stock car racing. Some of the drivers have their sights set on the ultimate in racing, Formula 1. The Super Vees will probably be the quickest cars around the short Fair Park course. Car with 200 horsepower, downforce wings, and ground effect pods on the sides requires the lightning reflexes of a skilled competitor, usually young. Formula car drivers tend to be younger than racers in other classes.

On a temporary course, such as the one in Dallas, the concrete walls of the track create a succession of blind turns that the drivers must enter and exit exactly on line. They commit to a line through a corner when they enter the turn, already aimed at an invisible exit 50 yards away, and rely on corner workers to warn of an obstruction ahead. Two young drivers from Dallas who will drive Super Vees in the Dallas race are Stuart Crow and James Clem III. In 1987, Crow finished 12th and Clem 17th in the Super Vee championship.

Both are planning to enter all of 1988s Super Vee races, and Dallas is the third race on their schedule, following an oval course race at Phoenix and a road race in Long Beach. Crow, son of Dallas builder Trammell Crow, operates his own business, maintaining vehicles for the Anatole Hotel and other Crow properties.

At 28 years-old, Crow has spent five seasons racing. He started in go-carts, moved to Formula Fords in 1983, won the Formula 2000 National Championship in 1985, finished third in the Canadian National F2000 Championship in 1986, and entered the SCCA Super Vee series last year. "If we don't finish in the top five in'88, " said Crow, we are doing something wrong. James Clem III, 27, has spent his entire life around racing. Clem's father and mother both raced when Clem was younger, and brother Mike currently races Formula Vees a slower formula car which uses a Volkswagen Beetle engine.

Although Clem's racing budget is minuscule compared to some, the support and expertise of his family allows Clem to run with the top cars. Since he started racing Formula Vees in 1981, Clem has finished either first or second in the SCCA Southwest Division Championships every year and raced in the SCCA National Championship at Road Atlanta six times. His best Road Atlanta finish was fifth in 1984, against the top drivers in the United States. The entire Clem family racing budget comes out of the profits from their racing engine business.

Chevrolet is entering factory-backed Camaros and Corvettes and lending assistance to privately entered Camaros and a new Baretta. Out of hundreds of feet of chrome-moly tubing, fiberglass, aluminum, and thousands of man-hours. There are even some Corvette pieces used, part of the rear end and pieces of a frame hidden someplace under all of the welds. But the only absolutely stock, unmodified Corvette part on the car is the windshield. Sevadjian has used up three so far.

At speed during testing, air pressure built up and collapsed the windshields inward. During the test sessions, at Hallett Raceway near Tulsa, Sevadjian broke the lap record set by Paul Newman.

Not bad for a home built car. Next thing we know, Sevadjian will be after Newman's other job too. The last race of the Grand Prix of Dallas is the Historic Car race, another race/exhibition of cars too expensive to drive flat-out and too neat to leave in the garage. Who knows which famous driver will dust off an irreplaceable toy and try it out against concrete barriers.

This item is in the category "Art\Art Posters". The seller is "leeparker" and is located in this country: US.